Born in 1810 in Zwickau, Robert Schumann was a German romantic Composer of the 19th century. His main focus was the piano, an instrument for which he composed numerous masterworks. Starting piano lessons around the age of ten, Schumann never acquired the level of skill comparable to his contemporaries such as Frédéric Chopin and Franz Liszt or his wife, Clara Schumann, due to an injured right hand, thought to be the result of either a syphilis treatment, or a surgery to increase the strength and reach of his fingers. 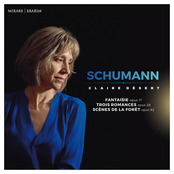